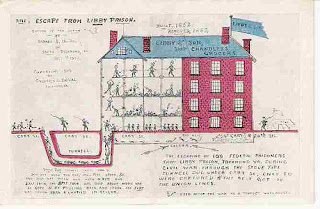 More than 100 Union soldiers broke out of the Confederate Libby Prison on February 9th 1864 in Richmond, Virginia.

Luther Libby ran a supply shop in the corner of a large warehouse in Richmond, Virginia. When the Civil War began the Confederates needed a prison to hold captured Union officers. They gave Libby fourty-eight hours to vacate his property. The sign “L Libby & Son, Ship Chandlers” remained on the building, and so it became known as Libby Prison.

Libby Prison took in an entire city block and on the south side of the prison was the James River. The prison was three stories high with a basement exposed on the river side. The first floor held offices for the Confederate guard unites, the second and third floor held prisoners. The basement was divided into three parts, a storage cellar, a carpenter’s shop and an abandoned kitchen. The kitchen area was abandoned because of flooding, and an infestation of rats. The area became known as “Rat Hell”.

Union officers broke into the “Rat Hell” by removing a stove and chipping into the chimney. From there they tunneled their way out. The floor in “Rat Hell” was covered in two feet of straw, which allowed the prisoners to hide the dirt from the tunnel. In seventeen days the Union Prisoners tunneled through to a vacant lot on the eastern side of the prison, coming up under a tobacco shed.

On the night of February 9th 1864 the Union officers began to escape Libby Prison in groups of two and three. The Confederate guards didn’t believe escape from Libby Prison was possible and weren’t looking for any of the signs. A hundred and nine men escaped the prison. At dawn on February 10th 1864, Union Colonel Harrison C Hobart replace the bricks in the fireplace, to cover the escape. The Confederate guards made their morning round unaware of the missing men.

Out of the 109 men who escaped Libby Prison on February 9th 1864, 59 of them made it back to Union lines, 48 of the prisoners were recaptured, and two of the drowned in the James River.
Posted by LivingInVermont at 5:50 AM