A New Jersey Medal Of Honor 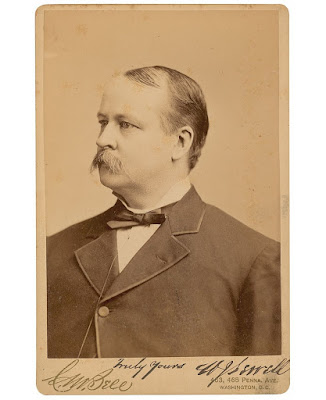 When the Civil War started, Sewell began service as a Captain in the 5th New Jersey.  He moved quickly through the ranks and was made Captain in the regiment 6 January 1862.  He was in command of a brigade at the Battle of Chancellorsville, where he would be wounded.  He would receive another wound while in command of the 5th on 2 July 1863 out along the Emmitsburg Road, near the Klingle Farm.  This wound would force from the field and out of the war until 1 October 1864.  When he returned to duty it was as the commander of the 38th New Jersey Infantry, but with his wounds still giving him trouble, he was reassigned to command of Fort Powhatan in the Department of Virginia until the end of the war.

Following the war Sewell went to work in the railroad industry, before entering politics.  He would serve in the New Jersey State Senate from 1872 to 1881, and was elected to the United States Senate, serving from 1881 to 1887.  At the time of his death, Sewell was the President of the West Jersey and Seashore Railroad.  He died at his home in Camden, New Jersey 27 December 1901.  Sewell was buried with full military honors in the Harleigh Cemetery in Camden, New Jersey.

Sewell was awarded the Medal of Honor for his actions during the Battle of Chancellorsville on 25 March 1896.  The citation reads, “Assuming command of a brigade, he rallied around his colors a mass of men from other regiments and fought these troops with great brilliancy through several hours of desperate conflict, remaining in command though wounded and inspiring them by his presence and the gallantry of his personal example.”

Find A Grave: William Joyce Sewell
Posted by LivingInVermont at 5:00 AM 4 comments:

To Cross The River

A part of the Romney Campaign, the Battle of Hancock was fought 5 January 1862.

Confederate General Thomas J Jackson moved his troops from Winchester, Virginia to Bath in order to block the movement of supplies on the Chesapeake and Ohio Canal and the Baltimore and Ohio Railroad.  Upon reaching the Potomac River across from the town of Hancock, Maryland the Confederate soldiers skirmished with the Union soldiers garrisoned in the town on 5 January 1862.  Jackson ordered artillery set up on Orrick’s Hill, and had it fire on the town.  The artillery caused only minor damage.

Union commander Brigadier General Frederick W Lander would not surrender.  Jackson had the artillery continue to bombard the town for two day while he looked for a place to cross the river.


On 7 January 1862, Jackson had his troop withdraw, and they moved on to Romney, West Virginia.  There were an estimated 25 casualties reported.
Posted by LivingInVermont at 4:52 AM 2 comments:

Under Orders Of The Governor

The Mount Vernon Arsenal was seized by troops under the order of the Alabama Governor on 4 January 1861.

The Mount Vernon Arsenal was authorized by Congress in 1824 and formally finished and named on 1 January 1829.  It was built near the Mobile River about 3 miles from Fort Stoddert.  The Arsenal’s primary duty was the assembly of gun parts manufactured elsewhere and the manufacturing of ammunition.

On 4 January 1861 militia troops under the orders of Alabama Governor Andrew Barry Moore seized the Mount Vernon Arsenal.  The commander of the Arsenal at the time was United States Captain Jesse I Reno.  He surrendered the garrison without any shots fired.

Once Alabama seceded, the Arsenal was turned over and remained in Confederate hands until the end of the war.  Following the fall of New Orleans in 1862, most of the equipment was moved to locations farther away from Union lines.

After the Civil War ended the Arsenal was turned into army barracks, and was used as a prison camp for about 400 Apaches between 1887 and 1894, including Geronimo.  The United States government deeded the property to the state of Alabama in 1895.  On 11 December 1900 the Alabama State Legislature turned it into the Mount Vernon Hospital for the treatment of the insane.

Posted by LivingInVermont at 4:40 AM 3 comments: 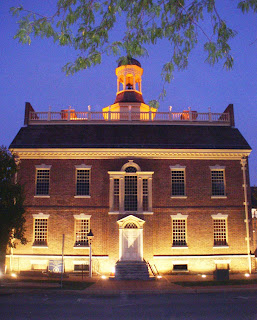 Two weeks after the first southern state; South Carolina seceded, Delaware’s legislature voted on 3 January 1861 not to secede from the Union.

Slavery was a troublesome issue in Delaware, where the influence of Quakerism led many slaveholders to free their slaves.  By 1860 over 90% of the state’s black population were freedmen.

Following South Carolina’s section, Delaware’s legislature voted on 3 January 1861, not to secede and to stay in the Union.  One of the five border, slave holding states to remain in the Union [Kentucky, Maryland, Missouri, and when it became a state; West Virginia].  Governor William Burton said that Delaware was the first state to ratify the Constitution, and join the Union, and it would be the last to leave it.

Although Delaware stayed in the Union, there were deep sympathies among the population for both sides.  Union troops had to occupy polling stations in the state in 1862 while state and federal elections were being held, due to fears of political intimidation.  Lincoln lost both of his presidential elections in Delaware.  It was the only slave holding state in which no Confederate regiments or militia was raised.  About 13,000 men fought for the Union, including 954 black troops.  There were an estimated few thousand men who left the state and enlisted in Confederate service in neighboring states.
Posted by LivingInVermont at 7:30 AM 2 comments: 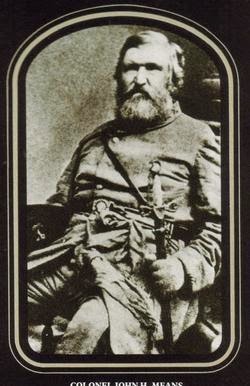 Confederate Colonel John Hugh Means, the 64th Governor of South Carolina was killed in action August 30th 1862 at the Second Battle of Manassas.

John Hugh Means was born August 18th 1812 in the Fairfield District of South Carolina. He attended the Mount Zion College in Winnsboro, before graduating from South Carolina College in 1832. He was a part of the planter class, and an outspoken supporter of State’s Rights. Means was elected the Governor of South Carolina in 1850, and he presided over the state convention of 1852, which passed the resolution stating that South Carolina had a right to secede. He used his time in office to increase the funding of the state militia.

In 1860 Means signed the Ordinance of Secession. He enrolled in the Confederate Army as the Colonel of the 17th South Carolina Infantry.  They saw action during the Peninsula Campaign. The 17th was part of Confederate General James Longstreet’s Corps, and was part of the right flank at the Second Battle of Manassas. Means was killed in action on August 30th 1862 [I have found his death listed at August 29th, 30th, 31st, and September 1st]
Posted by LivingInVermont at 4:47 AM 1 comment: 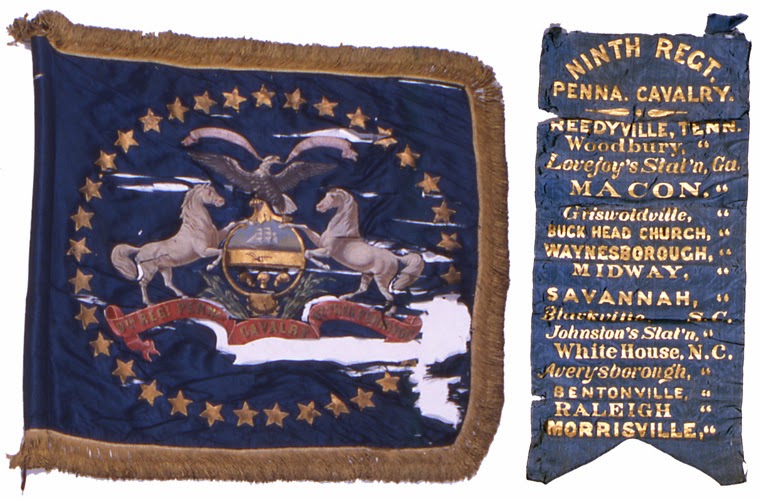 The 9th Pennsylvania Cavalry was made up of twelve companies recruited mostly from southeast and southcentral Pennsylvania. The regiment was organized near Harrisburg, Pennsylvania at Camp Cameron on August 29th 1861. After being trained the regiment was moved to Kentucky, where it became part of the Department of the Cumberland. In March they were ordered to Tennessee, where they tangled with Confederate John Hunt Morgan. They were reassigned to the Union Army of the Ohio, where they saw a small amount of action at the Battle of Perryville in October 1862. During the Battle of Chickamauga in 1863 they guarded the right flank of the Union army, and following the rout there, the 9th stayed and fought with Union General George Thomas.

In April 1864 the 9th’s enlistment was up. The men who re-enlisted took a furlough to go home and recruit. They would reform and see action that fall in Kentucky and Tennessee. When Union General William T Sherman began his march, the 9th was included, seeing action in the Battle of Griswoldville. On April 17th 1865 the 9th was part of the escort for Union General Sherman when he went to meet Confederate General Joseph E Johnston at the Bennett Farm to discuss surrender. Following the ending of the war the 9th was mustered out at Lexington, Kentucky.
Posted by LivingInVermont at 4:16 AM 5 comments:

End Of The Campaign 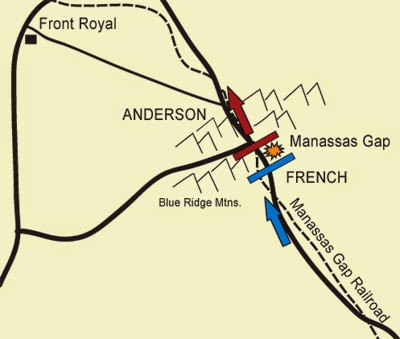 A part of Confederate General Robert E Lee’s retreat back into Virginia following the Battle of Gettysburg, the Battle of Manassas Gap, or the Battle of Wapping Heights was fought July 23rd 1863 in Warren County, Virginia.

At dawn on July 23rd 1863 French ordered an attack against the troops of Confederate Brigadier General Ambrose R Wright’s Georgians, who were defending the Gap. With Union Brigadier General Francis B Spinola using his larger numbers the commander of the Excelsior Brigade pushed Wright’s men back through the Gap by the late afternoon. Wright was reinforced by Confederate Major General Robert E Rodes’ division.

As darkness fell the Union attack stalled out. During the night the Confederate troops withdrew into the Luray Valley.  The Union army occupied Front Royal, Virginia the next morning, but the Confederate army had moved beyond pursuit. This was the last action in the Gettysburg Campaign.
Posted by LivingInVermont at 4:50 AM 2 comments: